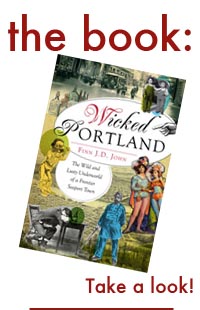 If you're looking for more information about early Portland bordellos, www. portlandwaterfront.org puts the story in the early city's context.

Cafe Unknown, a Portland history blog by Dan Haneckow. One of Dan's archive articles has lots of information about Portland's racy late-19th-century past.

Robert D. West, an engineer from Milwaukie, shot this video of the sternwheeler Willamette Queen going through the Willamette Falls Locks at Oregon City in February 2010.

The highway department guy didn't know how much dynamite to use, and said so on camera. But he still thinks the operation was a success. Check out the story of Florence's famous exploding whale ...

What happens when a colony of acolytes of an East Indian guru move in, then try to take over Wasco County? Check out the four-part story of the rise and fall of Rajneeshpuram ...

this oregon youth went on to save half a billion lives...guess who?

A local Willamette Valley teen-ager named Bert Hoover, an orphan sent from Iowa to live with his uncle, went on to save millions of lives and become a singularly ill-starred U.S. president.

oregon's most spectacular shipwreck ever.

The steam schooner J. Marhoffer was almost brand-new when, burning fiercely from stem to stern, it piled onto the rocks near Depoe Bay. It's the remains of this fiery shipwreck that gave Boiler Bay its name ...

Maritime madam Nancy Boggs kept her bordello on a barge floating in the river, until a police raid cut it loose. But the captain and crew of a sternwheeler came to save the day. Here's the story.

take off to the province of oregon, eh?

Few people know how close Oregon came to officially becoming a British possession under the treaty that ended the War of 1812. Only the presence of a handful of scattered, starving survivors from Astor's fur enterprise prevented it. Here's how.

timberline lodge could have been a glass skyscraper

Calling the plan a "profit-making eyesore," a Forest Service manager nixed 1920s plan for a modern steel-and-glass structure with an aerial tramway. You can read about it right here.

Built in the late 1960s as a "fairy-tale history of Oregon," the amusement park lasted just a few years before slipping into receivership. Today, all that's left of this odd and uniquely Oregonian story is a dilapidated guardshack. 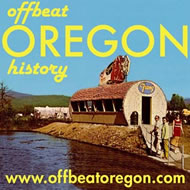 Riverboat-brothel operator Nancy Boggs took customers from both sides of the river, paid no liquor taxes to City Hall; in 1870s Oregon, it was the money, not the morals, that rankled. 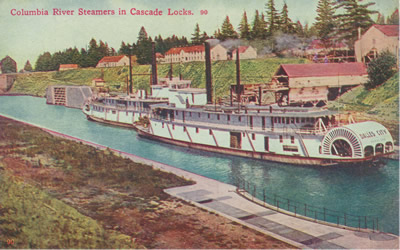 Sternwheelers wait to go through the Cascade Locks in the very early
1900s, shown in a hand-tinted picture postcard. These sternwheelers
were built several decades too late to have been the one that rescued
Nancy Boggs and her girls as they floated helplessly down the river
toward the sea. (Thanks to Mtsmallwood for scanning this postcard
and making this image available.) For a larger image, click here.

For owners of brothels, gambling houses and other “colorful” businesses, it’s a well-known trick: When the police and city government start trying to run you out of town, you go — into a “whisky scow” anchored in the harbor.

The folks who wrote about history in the 1800s didn’t talk a lot about things like this, so we can’t know for sure. (Also, many of the folks who wrote history AFTER the 1800s did an awful lot of guessing; see the note at the bottom of this article for more on that.) But as far as I know, the first successful whisky scow ever to grace the western half of the North American continent was a two-story tavern-brothel parked smack in the middle of the Willamette River in downtown Portland in the 1880s. 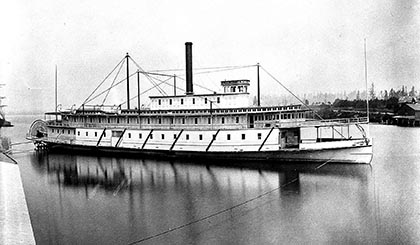 The sternwheeler Wide West, as seen in the early 1880s. It is possible, but
rather unlikely, that this is the riverboat that came to Nancy's rescue that
night. (Image: Salem Public Library)

(One quick note: The term "whisky scow" is, in this context, a little confusing. A "scow" was, in the 1880s, a very specific type of vessel. Scows were medium-sized utility vessels used to haul freight around on the river, often operated by workers who lived on them. They would have been in the 25- to 40-foot range, nowhere near big enough for an operation like Nancy's, which was built not on a scow, but on a barge. But perhaps "whisky barge" doesn't have the same cachet.) 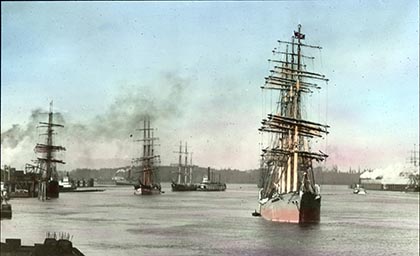 Ships in the Portland harbor, shown in a lantern-slide image from the late
1880s or possibly early 1890s. (Image: OSU Archives)

The opportunities the river created were obvious to local entrepreneuse and “riverboat” operator Nancy Boggs. First, she could move her 40-by-80-foot vessel up and down the river to respond to local market demand all along the river, from Oregon City to Linnton. Secondly, when anchored between the two Portlands as she usually was, her employees could service both cities; boatmen in small rowboats were stationed on either side, and customers would simply hop in and be ferried to Nancy’s little 3,200-square-foot island of iniquity. 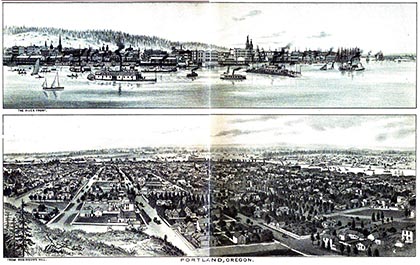 A two-page spread showing the Portland waterfront as it appeared in 1887,
published in The West Shore magazine.

And thirdly, Nancy paid no taxes to either city.

Taxes, not morals, were the problem

In the rough and gamey frontier towns of 1880s Portland and East Portland, it was this last item that bothered the City Halls — not morals, but money. Both towns, at the time, were fairly friendly to prostitution; land-based brothels were operating highly successfully on both sides of the river. In fact, the city's first police chief was part owner of a saloon that, some historians believe, dabbled discreetly in the trade as well. But these brothels paid liquor taxes. Nancy’s did not.

Several times, police from one side of the river or another tried to raid her boat. Nancy, tipped off by one satisfied customer or another, would simply hoist anchor and have her bordello towed close to the shore of the city that was not conducting the raid. The towns were bitter rivals, and their police forces did not cooperate with each other, so this strategy was effective for many years. (It's also pretty likely that the line cops on both sides of the river were sympathetic to her cause.) 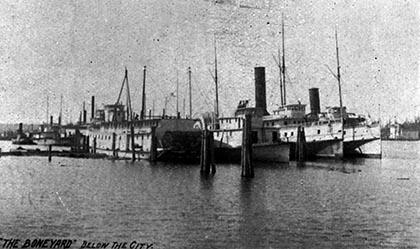 The Oregon Steam Navigation Co. "boneyard" had a sinister reputation. It
was where old steamboats went to die; at least one other maritime madam,
known as "Boneyard Mary," operated a business out of one of the derelict
vessels, although she appears to have been a sole practitioner. (Image:
Portland City Archives)

Finally, in 1882, the two towns made common cause and attacked from both sides at once in what was probably Oregon's first-ever coordinated inter-agency prostitution sting. Nancy, who had apparently anticipated something like this (or, perhaps, had been tipped off in advance), fought them off with a hose rigged to the boat's heating plant, blasting scalding steam — which, with furious and savage screams that could be clearly heard by watching City Hall V.I.P.s on both sides of the river, she turned on the approaching flatfoots. The steam, of course, made a tremendous hissing and impressive clouds as it blasted out into the chilly spring air, so it looked like a spectacular battle. 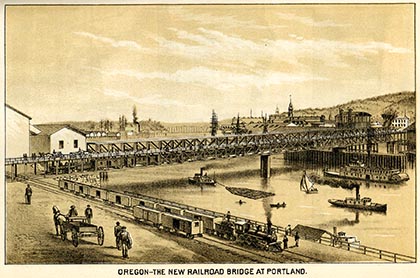 An image of the brand-new Steel Bridge in 1887. This image may actually
have been drawn from plans before the bridge was in operation. This
bridge lasted less than 30 years before it was torn down and replaced with
the Steel Bridge we know today. (Image: The West Shore)

Faced with such determined and dangerous-looking opposition, of course, the cops conducted a strategic retreat. (It's hard to avoid the impression that this battle was intended to look a lot fiercer than it actually was. Mayors and police chiefs might have wanted Nancy shut down, but she clearly had some good friends among the regular beat cops — on both sides of the river.)

But that night, under cover of darkness, someone — nobody knows who — took a sharp knife and a rowboat, and paddled stealthily out to Nancy's anchored vessel. Once there, this unknown person cut Nancy’s anchor line and set her bordello drifting down the river, headed for the Pacific Ocean. 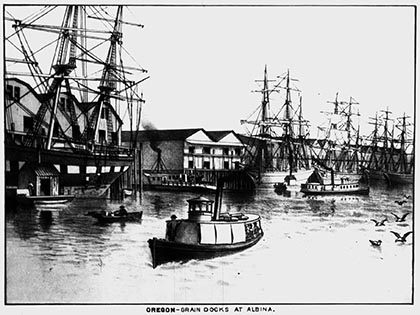 The docks at Albina as they appared in 1888, in a lithograph published in
The West Shore magazine that year.

And it was moving at a rather alarming pace. Despite its modern reputation as a rather staid and slow waterway, the lower Willamette moves right along when the water is high — as it was at this particular time.

As almost any Victorian-era woman would, Nancy first went for help to the one man still on board, a customer who had hit the jug especially hard and was sleeping it off. This fellow was every bit as helpful as you would expect a man like that to be. So Nancy let him sleep and, with a few words of reassurance to her girls, got in one of the rowboats and started pulling for the east side of the river.

A gallant rescue by a sternwheeler's crew

She landed in Albina and immediately found the skipper of a sternwheeler. After she explained to him that a barge full of girls and whisky was in distress and needed help, the captain rousted his crew, fired the boilers and headed downriver to the rescue.

At dawn the next morning, Nancy’s “hospitality” barge was back at anchor. One source says it was right back where it was the night before, in a little thumb-in-the-eye to whoever had tried to get rid of it; several other sources say it ended up anchored a few miles down the river, near Linnton. Quite what arrangement Nancy and her girls made with the captain and crew of the sternwheeler to thank them for their gallant midnight rescue is, happily, lost to posterity.

This battle might have been won, but Nancy must have known the war had just started and would likely not end well for her. Shortly after this incident, she brought her operation ashore in the North End, setting up housekeeping at a new joint on Pine Street near Third. Here, she paid her liquor taxes and had, as far as I’ve been able to learn, no further problems.

Editor's Note: The story of Nancy Boggs and her "hospitality barge" is one that's hard to pin down precisely. Most versions of this story can be tracked back to Edward "Spider" Johnson, an old waterfront tough guy and bartender at Erickson's Saloon, as told to Stewart Holbrook in the early 1930s for a series Holbrook was writing in the Portland Morning Oregonian. Many serious Portland historians have dismissed the entire story as a hoax, something wholly made up by Johnson to get Holbrook to keep buying him drinks. This is possible ... but, in my view, somewhat unlikely. In 1931, the 1880s were still a part of living memory for many older Portlanders, and a suggestion in the newspaper that a floating bordello was anchored near the Stark Street Ferry in 1882 would, if a lie, have elicited at least one or two letters to the editor from 75-year-old residents setting the paper straight. However, it is a good possibility that at least some aspects of the story — indeed, probably most of them — have been distorted over years of telling and retelling.

I hope you will enjoy this story for what it is — a fascinating and probably-mostly-true piece of Portland waterfront folklore.